This article was first published in the 2014 newsletter

Chesterfield is an historic market town of some substance, having received its market charter from King John in 1204, and it has possibly one of the largest open air markets in Britain.

The town sits on a large coalfield which formed a major part of the area’s economy along with pottery, engineering and chemicals, until the 1980s. Whilst there is little evidence of these industries today, the town remains proud of its industrial roots and its Town Centre. 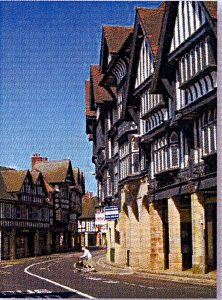 There was a phase, between the Wars, when a cosmetic offensive was mounted in Chesterfield to Tudor-bethan-ise’ the town centre, and revive the charms it probably never originally enjoyed. The awareness of a problem, however, and the willpower to do something to rectify it at the time is an interesting point.

Then in the 50s and 60s there is what could be called the Civic Era. It had begun before WW2 with the rather pompous Council Offices and some quite significant interventions in the neo-classical manner in the main streets, and it continued afterwards with the Law Courts and the new Civic Centre. There was even water and sculpture. All of the individual projects were quite good for their times, 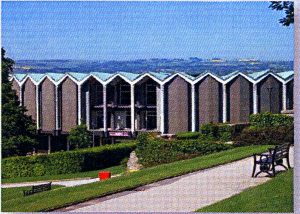 but they were planted out like bedding plants and turned their back on the historic core, which became increasingly seedy. Eventually Chetwynd House was replaced with a pleasant modern office block whose red brick walls and dark roof help knit the area together, though we still await the removal of the derelict car park at West Bars.    (finally demolished in 2016)

Then came the first coherent attempt at a strategy for the whole town, both in its conservation aspects and in the provision of scope for new developments. 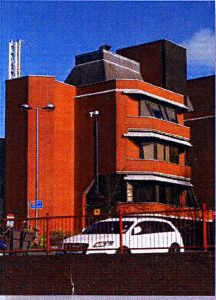 The architect, Sir Bernard Fielden thought the net result was quite good and was rightly proud of his work. There is a legacy here which is worthy of study.The public library is a successful modern building, whereas Theatre Yard was good on conservation but changes in levels deter footfall. The later shops on Vicar Lane/ Steeplegate work on plan but disappoint by the lack attention to detail. That, and a respect for context and good quality materials, distinguish the better new buildings around the town. The new courthouse, for example, looks good on the outside, but the artificial stone plinth is starting to let it down.The Market Hall extension shows that improvements can be achieved on a tight budget.

The developments over the last 100 years reflect how we value the town centre.The 2009 Masterplan for the town centre has a strong commitment to the future but probably needs refining, to take account of retail trends that have left the Co-Op store empty and filled the new retail units on the slightly disconnected Ravenside retail park. 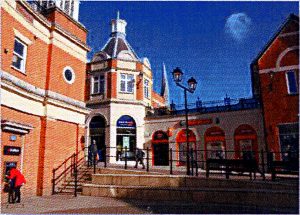 It is likely that the town centre will become more attractive as a cultural centre and a place to live. To succeed, it will need more attention to the public spaces, more connectivity and more of the good conservation of buildings that has occurred recently though Lottery funding. That is quite possible and should be considered alongside the redevelopment of the Northern Gateway and Waterside projects.