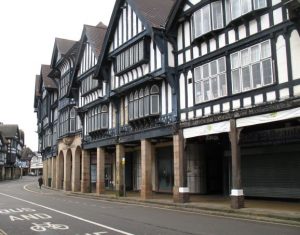 The first one on the list is the Victoria Buildings , usually known as ‘The Vic’ to the veterans , and often mentioned in the context of the ‘Vic Verandah’ . The love is there from  Chesterfield generations : the issue is that the building belongs to a London property management company , is currently empty of upper-floor tenants , and nothing is known of their plans .

Built as a private house c.1840, occupied by Chesterfield Grammar School 1928–67, later a community education centre. Owned by the charity which is the successor to the grammar school, whose sole trustee (Derbyshire County Council) has taken no action of ensure the future of the property since the building fell empty in 2014. 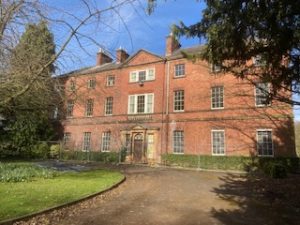 Built c.1790 by a local banking family, the Wilkinsons, briefly occupied by George Stephenson (1838–48), the home of the Markham family 1873–1925, occupied by a secondary school 1931–91, later by Chesterfield College. Owned and well maintained by Chesterfield Borough Council but at risk unless a viable new use is found for the mansion and school buildings. 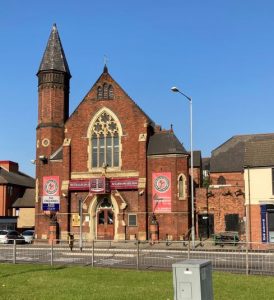 Built in 1881; after closure occupied by the YMCA and licensed clubs. Currently the subject of a flat conversion scheme but no visible sign of progress. A prominent landmark on conspicuous site.

A late 19th-century church, closed in 1928, later occupied by the Royal Hospital, empty for several years. The boundary wall has recently been damaged by a collision with a road vehicle. A striking building worth saving if a new use can be found for it.

Installed 1954 as a memorial to the men of the town who died in the Second World War. Currently neglected and in need of cleaning and tidying. Listed grade II and part of the important landscaping scheme around the Town Hall.

The pub at Brampton Manor has been the subject of an unresolved planning application for over a year. This has left two other buildings on the site vulnerable to damage and decay. The gazebo is listed grade II*, the barn is a scheduled monument.

Built in the 1870s as a doctor’s house and surgery; converted into a private hotel 1910, latterly a licensed bar, but has been empty for several years. The Borough Council has recently indicated that it is not interested in making the building an annexe to the Stephenson Memorial Hall, which it adjoins; future uncertain unless a new use is found.

Built in the 1930s for the Chesterfield & Bolsover Water Board, later the register office for Chesterfield. Recently offered for sale by the county council. In November 2021 it was announced that Derwent Rural Counselling Service  (a charity providing  therapy services) had purchased the property. A well-designed public building that merits the  retention it will hopefully now been given. 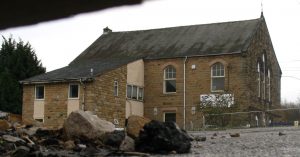 The stone-built, probably mid-19thcentury building adjoining Lidl’s supermarket is currently on offer to let but has been empty for some time. The last reminder of the once extensive presence of the Congregational Church in New Brampton.

A very important and rare surviving example of the fire resistant construction adopted for cotton mills from the 1770s; most of those elsewhere have been demolished. Listed grade II*. The cast iron components of the structure were probably made at the nearby Griffin Ironworks of Ebenezer Smith & Co. Later owned by Robinson & Son Ltd, who have been making strenuous (but unsuccessful) efforts over several years to incorporate the building in a redevelopment scheme for this part of their estate. 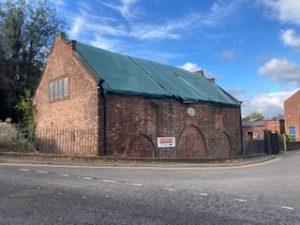 The only surviving building from the Smith family’s Griffin Ironworks, in the early 19th century one of the largest in Derbyshire. The firm specialising in light castings but also made ordnance during the Revolutionary and Napoleonic Wars, as commemorated on a plaque on the building. Also owned by Robinson & Son Ltd, who have again sought to find a new use for the building.

Probably dates from 1698, altered in the 18th century. Listed grade II. Requires almost complete restoration to make it fit for habitation. Currently the subject of what appear to be unauthorised works which have been brought to the attention of North East Derbyshire District Council. 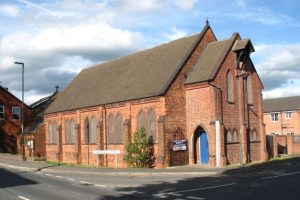 Important as the first major building designed by Barry Parker and Raymond Unwin, then of Chesterfield, later to become nationally famous Arts & Crafts Movement architects. About to be declared redundant; no future use has yet been identified. 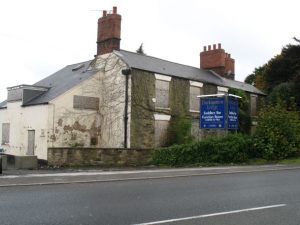 Probably 18th century former farm house, later a members’ club. Empty for some years; an eyesore which could once again become an attractive private house. Since our photograph here was taken a  few years ago the property has continued to deteriorate.

The Regal Cinema opened in April 1939 and closed in June 1966. It reopened just over a year later as the Wedgewood Cinema but closed again at the end of December 1969. A few months later it reopened as a bingo club, closing in late 2007. After refurbishment it once more reopened as the Regal Cinema – in the summer of 2010 – but closed in early 2011. It’s been vacant and unused ever since.